Greyhound Australia wishes to advise that due to the continuous changing and tighter travel restrictions, all services between Cairns and Brisbane have now been suspended until 30th June 2020 (subject to review). Please be advised that all passengers prior to entering the Northern Territory from the 02/04/2020 will be required to have sought exemption. Anyone who crosses over into NT (other than exempt category) will be taken to enforced isolation by the Northern Territory govt for 14 days. Please also be advised from Midnight Saturday those who are not exempt from travel will be required to pay for this isolation themselves. Greyhound Australia wishes to advise that all services between Sydney and Brisbane have been suspended until further notice. This is due to the restricted travel requirements being requested and imposed by the New South Wales and Queensland Governments. Greyhound Australia wishes to advise all pick ups from the Sydney and Brisbane International Airports have been suspended effective from 21 March to 30 June 2020. We will continue to service Domestic Airports and drop passengers to each Airport.

Q. Do I contribute to climate change when I travel?

A. Yes. The current options available for long-distance travel do contribute to climate change by generating greenhouse gases such as carbon dioxide (CO2). However, there are ways for you to reduce your carbon footprint, including by choosing to use more efficient modes of transport. To help you better understand the facts, we've compiled the latest data and research so you can make an informed decision.

Q. Why is coach travel more efficient than plane and car?

A. Research by the University of NSW comparing a return plane and car trip between Sydney and Melbourne found the plane could produce as much as 5.5 tonnes of carbon dioxide, which is roughly equivalent to 11 days of driving – despite it only taking nine hours to drive to Melbourne. However, if someone drove a car by themselves between Sydney and Melbourne, the greenhouse impacts would be similar to flying. (The main reason planes are so much worse is that they move about 10 times faster than cars, and the faster something goes, the more energy it uses and the more fossil fuels it burns – however, the emissions burden is reduced when it's shared by passengers.) Depending on how full they are, coaches produce between five and 10 times fewer emissions per passenger than cars or aircraft (Vincent 2007). 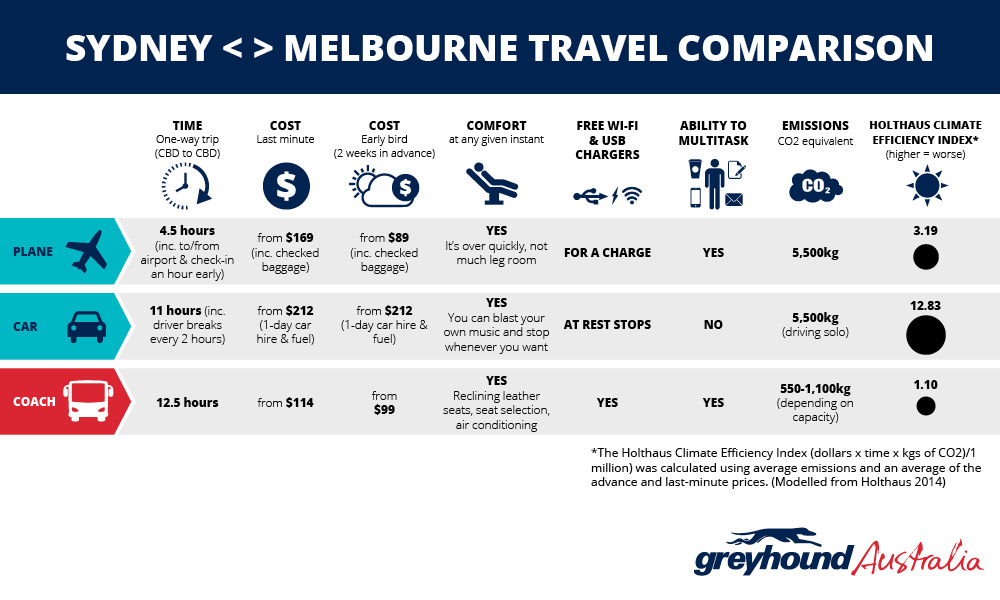 Q. How does travelling by coach compare to trains?

A. Researchers at the University of Sydney calculated the greenhouse gas intensity of coaches and trains – that is, the total kilograms of carbon dioxide emitted per passenger-kilometre. The study found that coaches produce 0.22 kg carbon dioxide (CO2) generated per pkm, while heavy trains are more than triple at 0.7 kg CO2 per pkm (Blackburn 2007). 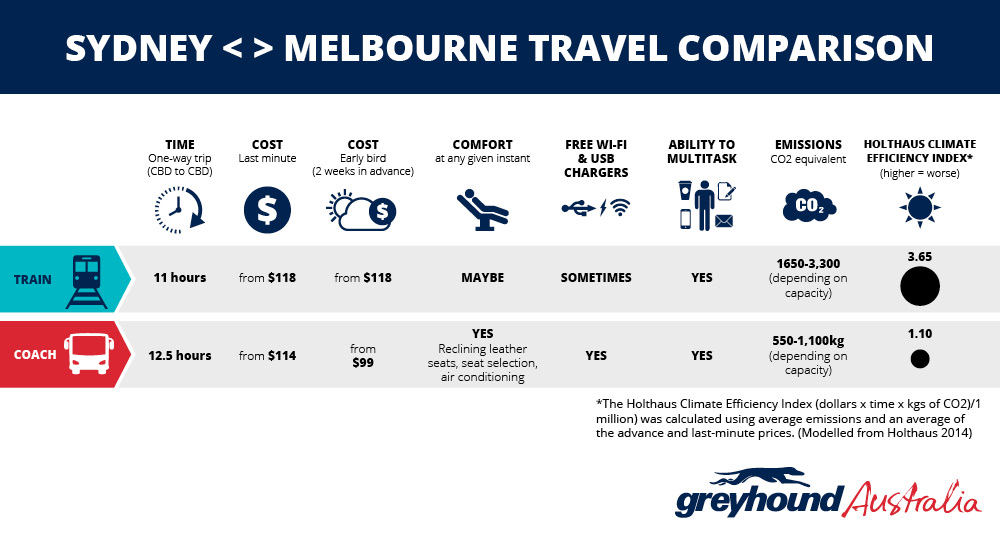 Q. Why is coach travel the most environmentally-friendly option?

A. Coaches have been shown to have the lowest average emissions per seat kilometre of all transport modes considered, with CO2 emissions of coach transport estimated as less than 1% of total tourism-related emissions (Peeters, van Egmond & Visser 2004). A 2002 study of tourism and transport in New Zealand revealed that a fully-booked coach is the most efficient form of travel. Domestic air and ferry travel were uncovered as the most energy-intensive modes of travel, followed by campervans, trains, and private/rental cars with medium energy intensities. Lowest intensities per passenger kilometre are achieved in the use of coaches, shuttle buses and motorcycles (Becken 2002).

Q. What are some ways I can reduce the carbon footprint of my travel?

A. Limit the size of your luggage by packing only what you need – the more a bus or plane weighs, the more carbon emissions it produces. Enjoy local food and drink which haven’t been imported from far away – not only will you help the environment, you’ll also experience new flavours (and maybe find a new favourite). And finally, avoid plastic bags and bottled water – take your own reusable shopping bags to the local farmers markets, and refill your bottles throughout the day. Every little bit helps!